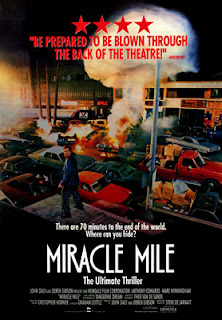 Miracle Mile was released in 1988 and was written/directed by Steve De Jarnatt. The film's main star was Anthony Edwards (E.R.,Top Gun,Pet Semetary 2) but had several appearances by recognizable actors such as Kurt Fuller,Denise Crosby,and Brian Thompson. The film is a mix between a love a story,a suspense film, and almost a horror film at times. But I will go ahead and warn you this film is not uplifting in any aspect, so if you can't handle serious subject matter, I would not recommend it.

The film takes place in modern day Los Angeles. The story follows Harry Washello(Anthony Edwards) who is your basic run of the mill lonely nice guy who ends up falling head over heels for a woman he just met. Him and this woman Julie hit things off so well, they decide to set a date for later that evening. Without giving too much more away let's just say Harry's plans go to hell once he finds out some unfortunate news. He has 70 minutes before a nuclear missle hits Los Angeles! The lines between dream state and reality seem blurred so you really don't know what to expect. This film constantly keeps you guessing. Miracle Mile is one of those films where you could easily put yourself in the character's shoes and really feel for the moment. You can't help but think to yourself...what would you do if someone warned you of your impending doom, would you do everything you could to escape or simply go back to sleep? Well for Harry the decision becomes pretty clearly pretty quickly and he engages on a journey to find Julie and get them both to safety.

This movie is full of adventure,suspense,and a tone unlike any apocalyptic film I've ever seen. It accomplishes the fear that "2012" should have put into our hearts, for about a hundredth of the budget! Anthony Edwards's performance as the everyday lonely man is perfect and really makes for a rather sympathetic character that you find yourself rooting for. Of course the character makes some poor choices, but as with most movies these poor choices are merely plot devices to further the running time. In the end you will either love or hate this film, but you will definitely realize there is nothing else like it. The highlight of the entire film would have to be the soundtrack by Tangerine Dream. This soundtrack has that 80's tone but with a very hypnotic beat that goes well with the neon lighted baron streets of Los Angeles depicted in the film.

When the credits hit I found myself feeling like this film had taken a bite out of me emotionally, and that is not something I feel too often. So if you like films that keep your heart pounding and your mind guessing, then this film is for you. You can't go wrong with "Miracle Mile"!

Available on DVD (Amazon/Ebay) and On Demand Video Rental (Amazon,Direct TV), Also currently showing on the ENCORE LOVE Channel...
Posted by Stu Cooper at 4:22 AM No comments: